What Is Firewalld & How To Configure Rules?

In this post we’d talk about ‘firewalld’ and it is benefits and how to get it configured in RHEL7 and above systems.

A Note on netfilter


In Linux ‘netfilter’ is being used which is a powerful network filtering sub-system. This allows kernel modules to inspect each packet traversing the system, and it could be dropped or rejected or allowed in a programmatic way and this applies to all incoming, outgoing and forwarded packets. So, in earlier RHEL6.x version we had ‘iptables’ which is a well-known netfilter program. However, in RHEL7.x version and above we've ‘firewalld’ in-place of ‘iptables’.

The new ‘firewalld’ is more powerful than earlier ‘iptables’ which can configure & monitor system firewall rules. A firewall is a way to protect systems from an unwanted traffic from outside. It covers both IPv4 & IPv6 rules and also ‘etables’  (to manage software bridges) settings. In earlier RHEL6.x version this was not possible using ‘iptables’, hence, there was ‘ip6tables’ & ‘etables’.


This daemon comes from ‘firewalld’ package which is installed by default in a ‘base’ installation mode, however, not in ‘minimal’ mode.

How does firewalld works?


In ‘firewalld’, all network traffic is classified into zones. Based on criteria such as source IP address of a packet or incoming network interface, traffic gets diverted into corresponding zones where appropriate rules gets applied. Each zone would have it’s own list of ports or services to be opened or closed.


The below diagram shows a simple demonstration of a firewalld function. In this sketch it is assumed that the system firewalld is configured to allow only communication on ports 22 & 25, and rest all requests are blocked/denied. 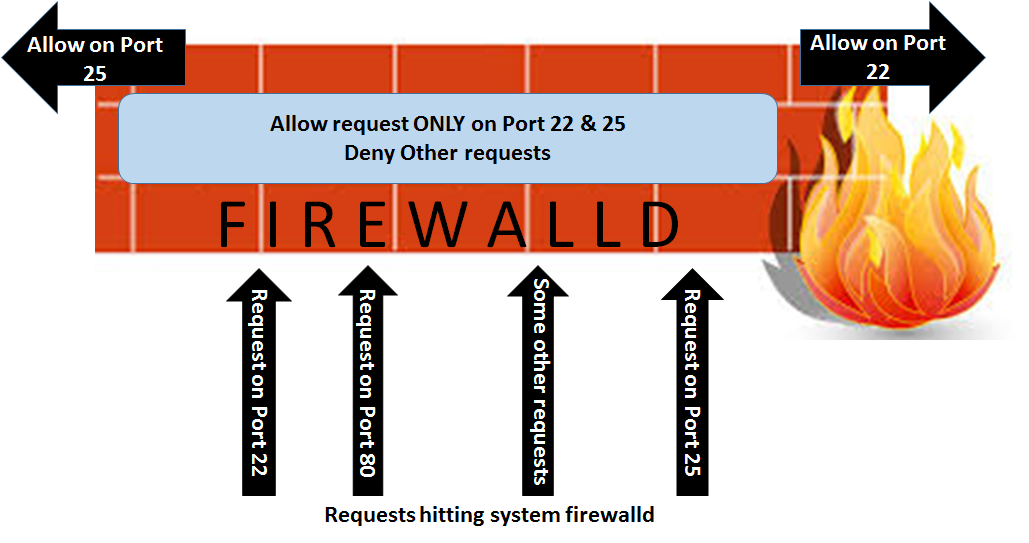 There are zones in firewalld…….

So, firewalld would inspect every packet that is traversing into the system, first it would be checked for source address, if that source address is associated with a zone then rules of that zone would be applied. If source IP address doesn’t belong to a zone, then rules from incoming network zone would be parsed. Zones are predefined sets of rules. Network interfaces and sources can be assigned to a zone.


Each zone would have its own list of ports/services to be allowed or blocked, so if packet in a particular zone doesn’t match permitted port/protocol/service then it would generally be rejected. There is ‘trusted zone’ which allows all traffic by default which is one exception.


There are number of predefined zones which are suitable for various purposes such as ‘trusted’, ‘home’, ’internal’, ’public’, etc., available.  Like-wise there are predefined services defined using which a user or administrator could allow traffic to pass through firewall. The command ‘firewall-cmd --get-services’ could be used to list out predefined services.

Let’s see the implementation of firewalld


By default ‘firewalld’ package gets installed and services gets started. To check if the 'firewalld' service is running or active, run the below commands:


# systemctl status firewalld → this would tell us the service status

To find out if firewalld service is active and running using 'firewall-cmd' command:

To find out list of configured interfaces, ports, services for dmz zone the following command could be used. If zone option is not specified then it would list out details for default zone:

Let’s see how to allow packets to pass through http (80) port on default zone. So, the command is:(one could skip the --zone parameter as the firewalld would use default zone if not mentioned) :
[root@test ~]# firewall-cmd --add-service=http --zone=public --permanent
success

Now, let’s see how to add a customized port number “4567/tcp” in firewall settings so that traffic would pass through in the default zone which is ‘public’:
[root@test ~]# firewall-cmd --permanent --add-port 4567/tcp --zone=public
success

These changes are not effective immediately, only after service restart/reload or system reboot. Without the "--permanent" option, a change will only be part of the runtime configuration.


→ To list out all active/enabled ports in firewalld in default zone:

→ To list out all active/enabled services in firewalld in default zone:

→ To list out all active/enabled services/ports in firewalld in default zone:


Note: Using ‘--permanent’ parameter one could add/modify the rules and makes it persistent across reboots. Anytime running the command “firewall-cmd --reload” would drop runtime configurations and apply persistent configuration.

There is also 'rich-rule' set available which could be used to add more sophisticated firewall rules. Some of the use cases are like specific range of IP address on a particular port but deny access to one of the IPs in that range could be done using 'rich-rules'. This blog page shows a simple/basic configurations done in firewalld, users may have to refer further documentations to get to know about advanced/complex firewall configurations.

Posted by SimplyLinuxFAQ at 3:29 PM

Nice journal very fascinating and useful information on your website. Thanks for sharing the journal and this nice information that's definitely on the brink of facilitate us....We are going to be change this post with new data to our data box.